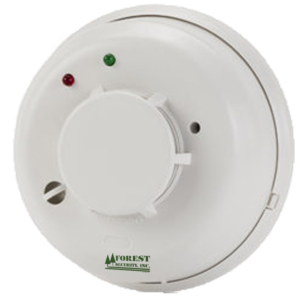 With a Wireless Smoke Detector, you will further increase the capabilities of your Forest security system. This is a wireless device with integrated synchronized sounder. In installations with multiple smoke detectors, when one smoke detector sounds, it signals the panel to command all smoke detectors to sound.

Any fire zone tripped on the panel will cause the sounders to initiate, plus it can also trigger other wired strobes and strobe horns.

The smoke detector includes a tamper switch that sends a trouble signal when the detector is removed from the mounting base.

Up to 572 units can be installed on one system. This smoke detector uses the robust and experienced 900 MHz Two-Way Wireless technology which is also approved for commercial fire applications, so your know your home is protected with the best.

Forest Security’s Two-Way Wireless systems operate in the frequency range between 905 and 924 MHz. This is an unlicensed radio wave or spectrum band that is relatively uncluttered.In the 300-433 MHz band, regulations prevent check-in signals from being sent more than once an hour, which means that an intruder could remove a sensor and not be detected for nearly an hour.

Wireless alarm systems operating in the 905-924 MHz band do not have this limitation, enabling sensors to be supervised as frequently as every three minutes. Our wireless receivers supervise for transmitters that go missing. With Two-Way communication, each wireless transmitter communicates with the receiver using supervision messages.

Each transmitter can be programmed for no supervision or a 3-, 60-, or 240-minute window providing flexibility and allowing increased security for those applications that require shorter supervision times.When the receiver does not receive any supervision messages from the transmitter for the programmed window of time, the receiver reports the zone or output as missing to the panel for display and reporting to the monitoring center.

Forest’s Two-Way Wireless products are typically placed up to 1,200 feet from the receiver. With systems operating in the 300-433 MHz band, the maximum recommended distance between sensor and receiver is 200 feet. Even with a repeater, that extends the distance only to approximately 400 feet.

Forest Security’s wireless communication employs 900 MHz frequency-hopping spread-spectrum to ensure clear and accurate signal transmissions without interference in practically any environment. The spread-spectrum technology enables the system to use numerous channels within the 905-925 MHz band and to dynamically hop from frequency to frequency.

By using spread-spectrum technology, this ensures that our wireless system cannot be defeated by jamming. With non-spread spectrum systems that operate in a narrow frequency band, an intruder can use a wireless device to flood the area with transmissions at the same frequency used by the alarm system, thereby preventing alarm signals from reaching the receiver.

Every 32 milliseconds, our Two-Way Wireless hops to a new frequency across 53 frequencies. The order is random and determined by the house code of the panel. Although spread-spectrum technology uses frequencies that other systems use and will encounter interference from other systems, it is designed to overcome that interference inherently.

As the device and receiver are hopping to a different channel, when it encounters a channel that has interference on it, it simply moves on, and the data acknowledgment will not be received, thus requiring the panel or sensor to resend that signal. This trying and re-sending will automatically occur until the message is sent and acknowledged. This self-healing system is very reliable.