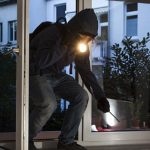 Chicago police are investigating after four homes were burglarized in the city’s West Town neighborhood—including one where a found the burglars in her bedroom.

Josh Avratin says he rushed home Tuesday to find his condo in the 600 block of North May Street ransacked. His home was one of at least four burglaries that afternoon, police say. Burglars appear to have pried open doors in search of designer shoes, purses, jewelry and electronics.

“I was at work and I got a text from my roommate,” he recalled. “They had taken my computer, a watch, I’m not sure what else—my stuff was strewn about my room.”

Curtiss Schriber was also a victim of the rash of burglaries.

“I went and did a quick look at my roommate’s rooms—all of the drawers had been gone through—there were papers all over the place,” he said.

A few doors down a woman came home from work to find two men ransacking her bedroom.

“I guess she scared them enough they jumped off her back patio—and she called me frantic,” neighbor Ashlynn McCarthy said.

Police say they only have a vague description of the suspects but were able to get finger prints they hope will provide a break in the case.