The ‘Kissing Bug’ Has Made Way to Illinois

The Potentially Deadly “kissing bug,” which can transmit Chagas disease, has been reported in Illinois according to the Centers for Disease Control. 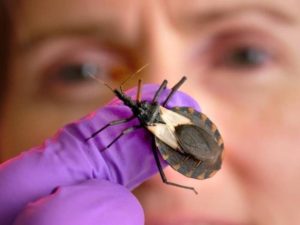 The “Kissing Bug” is on the move and has made its way from South America all the way into the United States threatening human and pet health.

The triatomine bug typically hides during the day and becomes active at night when it feeds looking to bite an exposed area of skin to bite, such as the face, hence its common name ‘kissing bug”.

Chagas Disease has two stages. The first acute stage lasts about 2 months. Symptoms are mostly mild and unspecific. Less than 50% have visible signs which can include a purplish swelling on one eyelid, fever, headache, enlarged lymph glands, muscle aches, difficult breathing, swelling, abdominal or chest pain. During this first phase, a high number of parasites circulate in the blood due to the infection.

In the second, or chronic stage, the parasites are found mostly in the heart and digestive muscles. Up to 10% suffer from digestive issues due to an enlarged colon or esophagus and up to 30% have cardiac disorder. Years later, this infection can lead to arrhythmia, progressive heart failure and even sudden death.

8 million people worldwide are living with Chagas Disease, about 300,000 in the United States.

Trypanosoma cruzi is the parasite that causes Chagas disease. It can be transmitted from mother-to-baby, through infected blood, organ transplant, and more rarely through contaminated food or drink.

The Trypanosoma cruzi infection is curable if treatment is initiated soon after infection. If it progresses to the chronic phase, anti-parasitic treatment can also prevent or curb disease progression.

The map below shows where the kissing bug has been found or has the potential to be found. 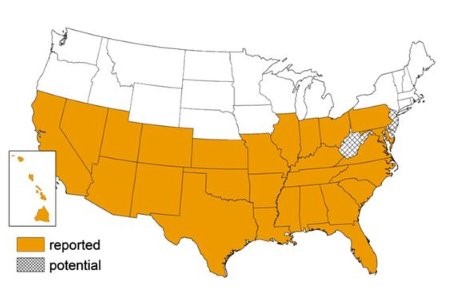 What To Do To Protect Yourself

The CDC says people can protect themselves against the kissing bug in several ways:

If you think you have found a kissing bug, place it in a container and take to your local health department. Clean the area with one part bleach and nine parts water to decontaminate the area.

Researchers with Texas A&M University’s Agriculture and Life Sciences Department said the parasite can infect dogs with severe heart disease, though many don’t show any symptoms. Cardiac rhythm abnormalities and sudden death may occur, as well as bloat due to reduced cardiac function and inability to properly pump fluids throughout the body. The researchers said complications are typically related to the age of the dog, the activity level of the dog and the genetic strain of the parasite. There is currently no vaccination to protect humans and dogs from Chagas disease.