Fire! You have 3 minutes to get out!

Fire! You have 3 minutes to get out!

Your parents’ generation had 17 minutes to escape. In modern homes, you only have about three. Find out why and learn how to increase your chances of survival.

According to research by Underwriters Laboratories, a nationally recognized safety testing company based in Illinois, the combination of home building materials, synthetic materials used in furniture and open home designs cause fires in modern-day homes to burn much faster than in older homes.

UL Consumer Safety Director John Drengenberg says he wants families to be aware of the importance of early wanting and immediate evacuation.

“All of our expectations have changed in terms  of the volume of fire that firefighters can expect on arrival and how quickly a building will fail.”

“When smoke alarms first became common in homes 35 years ago, after they went off, you had on average about 17 minutes to get out of your house until the room turned to flash­over,”  he says. “Today, that 17 minutes is down to 3 or 4 minutes.”

WHY THE QUICK FIRES?

A variety of causes contribute to this effect. For example, according to UL’s research, substances such as engineered lumber burn more quickly.

Sometimes, materials are just not as effective in stopping fires. For example, drywall burns slowly, according to Drengenberg, but lath and plaster walls in older homes provide a thicker, stronger barrier against fire. Additionally, changes in doors and windows affect fire spread.

Modern hollow-core doors slow down a fire, but still bum through faster than solid doors. And tightly sealed double-pane windows crack and collapse under lire pressure faster than older windows sealed with putty.

Drengenberg  notes that these materials are more flammable than before. “Your home is furnished with more synthetic materials than your grandmother had’ he says. “Pillows were stuffed with feathers, the sofa was filled with cotton. That stuff still burns, but it burned slower than fabrics with synthetics in them.”

A variety of other materials contribute to fires. For example, experts say CSST gas lines – which have become popular in recent years – pose a fire danger during lightning storms if they’re not grounded properly.

Danger also lurks beyond materials, says Mark Riffey, executive vice president at Ryan Fire Protection in Noblesville, IN. “It’s not the house that’s burning, but the stuff inside,” he says. “A candle sets a curtain on fire; the heater sets the couch on fire; an outlet short circuiting sets the furnishings on fire.  lt starts there, breaks through the windows, flashes over and sets tile structure itself on fire.” 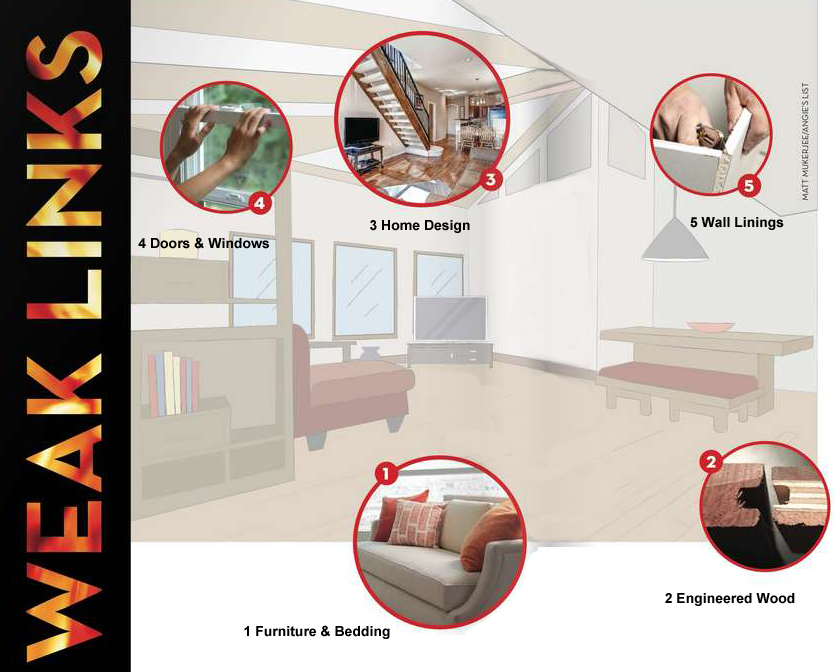 Synthetic materials in furniture and bedding burn much faster thon materials of so to 100 years ago.

THEN:  A candle flame set to a cotton sofa required more than 10 minutes to consume the sofa, and the fire reached flashover in 29 minutes and 30 seconds.

NOW:  A candle flame set too polyester sofa resulted in the room being consumed in 3 minutes and 40 seconds.

Engineered lumber is used In many components of homebuilding, but primarily as floor joists. It is cheaper and stronger than traditional lumber,

THEN:  A floor built from traditional lumber collapsed 18 minutes and 35 seconds after ignition

NOW: A floor built from engineered lumber collapsed in just 6 minutes under the same conditions.

THEN: The overage size for new single-family homes in 1973 was l.660 square feet.

THEN:  A wood frame. single glazed storm window, such as those used between 1950·1970. foiled under fire in on overage of 9 minutes and 37 seconds.

Gypsum drywall doesn’t burn quickly, but it also doesn’t slow the spread of fire. Plaster and lath walls (much more common a century ago ) greatly slow down the spread of fire. Insulation affects fire’s spread  minimally. but an air gap behind drywall as compared to plaster may allow fire to spread foster.

THEN:  In UL tests, plaster and lath was breached 74 minutes after ignition.

NOW:  Gypsum board under the same circumstances was breached in 23 minutes and 30 seconds.

Basic home design has also changed in the past 50 years. Open floor plans contribute lo swift fire spread. “With an open floor plan, you don’t have the compartments anymore;· Drengenberg says. “lt used to be, your kitchen was a compartment with a door that could close. And now people look for that open floor plan, so they can watch the kids play in the family room while they’re fixing dinner in the kitchen, and the dining room is often attached. They’re basically one large room, and if there’s a fire in one of those rooms, it can easily spread !’

Average home size has leapt by 54 percent over the past few decades, according to UL’s research. “A larger home translates to more fuel, and where there’s more fuel, you have more chance of things burning”  Drengenberg  says.

That said, modem-day families are at less risk now than in previous years of death by a house fire, due to a variety of factors. In fact, fire deaths have gone down by 22 percent since 2004. Smoking, once a common cause of house fires, has decreased greatly in recent decades, and improvements in electrical systems cause fewer electrical fires. Increased use of smoke alarms and home fire sprinklers also bring down fire fatalities even further.

Indeed, nobody’s suggesting that home-builders stop using engineered lumber, double pane glass windows or drywall, but merely that homeowners need to be aware or changing lire dynamics and plan accordingly. “These materials are better and easier to use, they’re stronger and they reduce cost,” Drengenberg  says. “We know it’s just not practical to use lath and plaster in !tomes today. We’re not saying it’s bad, just that it’s a fact of life.”

Jeff Hudson worked for 36 years as a firefighter and says he saw firstJ1and how fire dynamics have changed. So when he built a house in 2015, he made sure to install a lire sprinkler. “Putting in a fire sprinkler was a no-brainer,” he says. “Years or experience have shown me this is a solution that can help me avoid a tragedy in my family!’

Hudson, who is now a residential fire specialist with the National Fire Protection Association, says the danger of house fires struck particularly close in 2010, when he was a Fire Chief in Shawnee, KS. “One of my firefighters lost his life doing search-and-rescue operations inside a home:’ he says. “Had there been a residential fire sprinkler in that house, we probably would have ended up with a few firefighters just cleaning up water waste and back safe at home with their families that night.”

Experts advise homeowners to in­stall a sprinkler system. Costs vary by region; Hudson says his system cost $1.48 per square foot. Retrofitting a home can be more complicated and Riffey says homeowners can expect to pay about $2 to $3 per square foot.

Hudson says the cost is worth the peace of mind: “There’s great peace of mind in knowing that [my grandchildren are protected by a residential fire sprinkler while they’re here.” 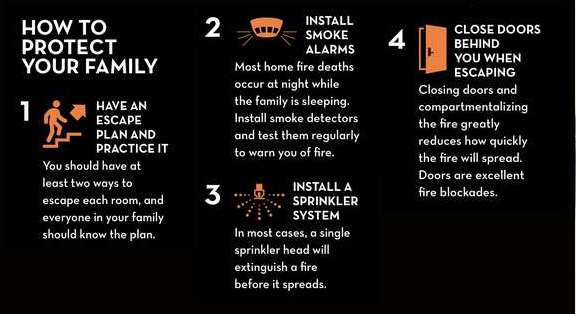 When you have a Forest Security Monitored Smoke Detector installed with your burglar alarm, you are protected 24/7 When you are in the home in the event of a fire, not only with the alarm sound to notify you, we will call you to ensure you exit the home while we are dispatching the fire department so they arrive as quickly as possible to extinguish the fire . If you are not at home, we are still on watch to dispatch the fire department   We will call your emergency contact numbers to alert you. Let Forest protect your home and your family today!