What can your Forest Security Video Doorbell do for you, other than announce who is at your front door? How about stop an attempted burglary! 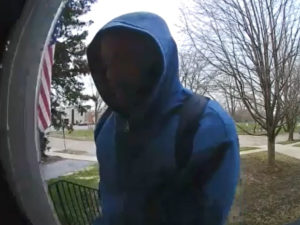 Screen grab of a video doorbell feed, showing a man attempting to break into a Riverside home | Riverside police

On Thursday, April 18th, in west suburban Riverside, a burglary was stopped in its tracks, thanks to a video doorbell. The homeowner watched his video cam feed as the would-be intruder tried to pry open his front door and called the police to report a break-in in progress.

Riverside police arrived at the scene located in the 300 block of Robinson Court, in under 10 minutes and found the would-be burglar walking along the Burlington Northern Railroad tracks.

The homeowner did not press charges since the suspect never actually entered the home. The suspect who was found in a highly intoxicated state, was taken to MacNeal Hospital and treated for alcohol overdose.

“If there was ever a video or event that displays how video doorbell systems are an important device in assisting in police investigations, and in this case preventing a burglary, this video would be it,” Riverside Police Chief Thomas Weitzel said. “While the homeowner ultimately did not want to criminally prosecute, there’s no question that a crime was averted because of the video doorbell system and the immediate reporting of this incident to Riverside police.”